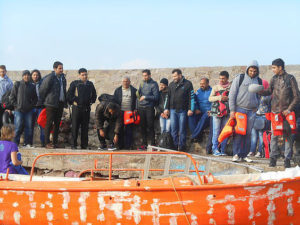 Author’s note: I am in Lesvos, Greece to work on a project with Angela Farmer and then to take the two week workshop she offers with Victor Van Kooten. As soon as I arrived, I learned about the refugee crisis as rafts were arriving on the shore right in front of the place where I am staying. I have been deeply moved by the courage and tenacity of the people risking their lives in desperate conditions as they have allowed me to accompany them to Molyvos, the coastal town where they are first registered by the coast guard. They give new meaning to the words “survival” and “justice.”

“Since I have lost my brother, I am lost, “ the twenty-three year old woman tells me as she shows me a photo on her IPhone of her brother, brutalized in Syria when he refused to fight in the Syrian war.

Shenda is the only woman among 40 men who made it to shore last week on an overcrowded raft from the coast of Turkey across the Aegean Sea to the island of Lesvos in Greece. I woke to the sound of helicopters and then heard shouting, ran outside to see the tilting raft, barely making its way to shore.

Since arriving in Lesvos a few weeks ago to further my study of yoga, the number of people attempting to make this desperate crossing has escalated precipitously. I now realize I am in the middle of “one of the largest refugee exoduses in recent history.“ (BBC Word News). 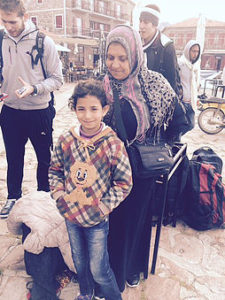 Since 2011, 11 million Syrians have been displaced and four million people have fled the country all together, many trying to make their way to Italy or Greece, the two European countries that are still accepting them for temporary stays.

On yesterday’s raft was a periodontist whose clinic was destroyed, his family splintered. The raft held a nine and ten-year-old boy and their father, a Sufi chemical engineer, a 40 year-old painter, several teenager in hip hop sneakers, all fleeing for their lives.

As they were making their way to shore, the coast guard was rescuing another raft, this one with Afghan mothers, babies, fathers, and grandmothers. A few hours later, another raft of Syrian refugees arrived on the shore as well. 85 people just yesterday. The warm weather and dire conditions in Syria promise that the number of people risking their lives to get to Greece will only increase. (1)

As the first raft of Syrians stumbled to shore on the beach rocks someone asked me, “which island is this” not sure where in Greece they had even arrived. Many had spent their life savings—the equivalent to over a 1000 US dollars—to buy a space on the rafts. Some thought there would be a truck waiting to carry them to Athens, not yet knowing the laborious days in front of them—an hour walk up steep hills to the town of Molyvos, waiting for a bus in the night to Mytilini, the biggest city in Lesvos and then to Athens where, hopefully they will be granted papers for temporary stay.

Then, most will face months, maybe years, of being seen as “illegal” as they try to get to Germany, Belgium, or other European countries to find jobs. 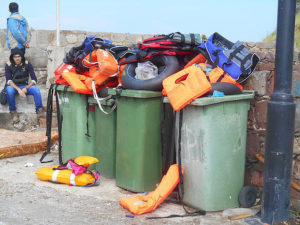 I am in awe of the courage of the hundreds of women, men and children who are making it to shore or are being rescued by the Greek coast guard when their rafts capsize. I am honored to be watching as unarmed officials on Lesvos are respectfully attempting to continue their search and rescue, registering and transporting people day after day.

The first time I walked with a group from their raft to the gorgeous coastal town of Molyvos, I felt my body bracing for when we reached the officials. As a US citizen, I was expecting armed police shouting orders and prison-like policies. Instead, what I have witnessed is a dedicated and hard working coast guard, trying, with extremely limited resources, to help the people get to Athens. When I thanked one of the coast guard rescuers and remarked how, if this were the US there would be gun carrying officials everywhere, he said, “Yes, I see the military approach from the US on TV. Why would I ever carry a gun here? These are desperate people trying to save their lives. Our job is to help them.”

Each day, as more refugees have arrived, I have witnessed the people from Molyvos welcome the refugees. Day after day, restaurant workers kindly allow mothers and babies to slip in and use their bathrooms; shop keepers add a couple of cartons of milk for free along with supplies we are purchasing; people in the community gather warm clothes and fresh bread to give to the refugees; and tourists ask questions, sometimes, finding themselves buying badly needed supplies for the refugees as well.

When I arrived a few weeks ago to continue my study of yoga with Angela Farmer the most revered elder yogini in the world, I had no idea what I would witness is yoga practiced on the streets: the yoga of flexibility and resilience practiced by the refugees trying to save their lives; the yoga of compassion they practice as they share meagre resources with each other (most of whom had never met each other before getting on the rafts); and the yoga of nonviolence being practiced by the people of Greece. 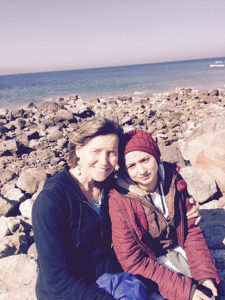 This week we heard that the UN has authorized money for rescue operations, as a boat of more than 800 people recently sunk off the coast of Libya, finally making world news. (2) A coast guard official tells us they have heard rumor of additional funds for years. They have never seen it. Meanwhile, today, three more rafts arrived—two holding Syrians, one from Afghanistan. The refugees from Afghanistan walked 23 days across the desert before finding their way to Turkey. The journey that cost them 1000 dollars would cost me ten dollars on a fancy tourist boat. We need tourist boats for refugees. We need to stop war.

When I asked a Lesvos local why the people the Greece have welcomed refugees for thousands of years, he said, “the Greek word ‘sano’ means foreigner and guest. For us, they are one and the same.”