Skip to content
Fingernails Across the Chalkboard: Poetry and Prose on HIV/AIDS from the Black DiasporaBecky Thompson2017-12-11T22:39:59+00:00

Fingernails Across the Chalkboard

Fingernails Across the Chalkboard is an international, multicultural anthology of literary criticism, poetry, fiction, visual art, and literary nonfiction on HIV/AIDS. Publication date coincided with the Gwendolyn Brooks Conference and World AIDS Day (25th year commemoration). Fingernails Across the Chalkboard was adapted into a play that premiered in Chicago and at the National Black Theater, Harlem, New York in March 2008.

Featuring a wide assortment of poetry, fiction, and creative nonfiction, this powerful volume confronts the existence of the HIV/AIDS epidemic within the Black Diaspora. Defining a cultural dialogue that will be prevalent well into the 21st century, these writings celebrate life and the living by humanizing the effects of HIV and giving powerful voices to the affected and afflicted. The writings, presented in four major sections, speak out about the hard-hitting truths that surround HIV; the forms of abuse, such as incest and rape, which cast HIV into the lives of girls and women; the issues of grief and loss; and the range of reactions, from acceptance to denial, activism, and the search for justice. The writers featured include Dennis Brutus, Tony Medina, Randi Triant, Truth Thomas, Duriel Harris, Frank X. Walker, Arisa White, Tara Betts, and Lamont B. Steptoe.

In April, 2008 an innovative staged reading of the book, Fingernails Across the Chalkboard: Poetry in Motion premiered at the National Black Theater in Harlem, New York. It was produced by the Urban Theatre Initiative and directed by Kamesha Jackson.

Fingernails Across the Chalkboard is available for purchase on Amazon. 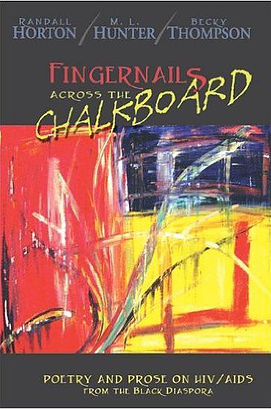