A Promise and a Way of Life

Not since the Civil Rights Movement of the 1950s and 1960s, when many white college students went south to fight against Jim Crow laws, has white antiracist activity held the public’s attention.

Promise was honored by White People 4 Black Lives (in Los Angeles) in 2021-2022 in celebration of its 20th anniversary. Check out: Facebook.com/wp4bl.

Yet there have always been white people involved in fighting racism. In this passionate work, Becky Thompson looks at white Americans who have struggled against racism, offering examples of both successes and failures, inspirations, practical philosophies, and a way ahead.

A Promise and a Way of Life weaves an account of the past half-century based on the life histories of thirty-nine people who have placed antiracist activism at the center of their lives. Through a rich and fascinating narrative that links individual experiences with social and political history, Thompson shows the ways, both public and personal, in which whites have opposed racism during several social movements: the Civil Rights and Black Power movements, multiracial feminism, the Central American peace movement, the struggle for antiracist education, and activism against the prison industry. Beginning with the diverse catalysts that started these activists on their journeys, this book demonstrates the contributions and limitations of white antiracism in key social justice movements.

Through these stories, crucial questions are raised: Does antiracist work require a repudiation of one’s whiteness or can that identity be transformed through political commitment and alliances? What do white people need to do to undermine white privilege? What would it take to build a multiracial movement in which white people are responsible for creating antiracist alliances while not co-opting people of color?

Unique in its depth and thoroughness, A Promise and a Way of Life is essential for anyone currently fighting racism or wondering how to do so. Through its demonstration of the extraordinary personal and social transformations ordinary people can make, it provides a new paradigm for movement activity, one that will help to incite and guide future antiracist activism.

A Promise and a Way of Life is available for purchase on Amazon and Barnes and Noble. 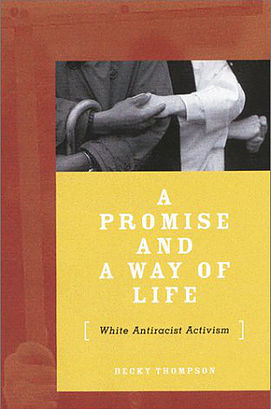